The name itself, Rwenzori, in the local Bakonjo language means “rain maker”, so much so it can rain every day of the year and water has an eccentric presence in all its forms: rain, fog, ice, clouds, snow, rivers, mud. Several European explorers in Uganda and Congo failed to see the mountain tops for a long time, mud will be your trekking companion for the most part. 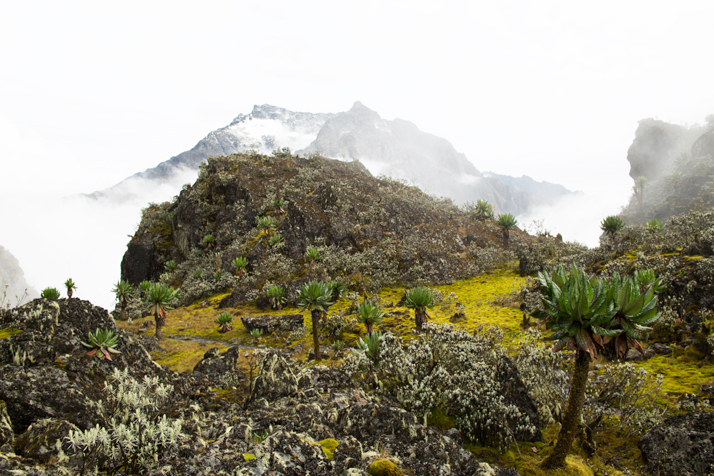 View of Vittorio Emanuele peak in the mist as seen from Stuhlman Pass.

A supernatural silence lingers on the highest ridges of the Rwenzori, where rocks and boulders are engulfed by moss and ferns. Above 3500m wildlife is scarce, while the botanical realm grows with an astonishing luxuriance. This is the prolific afroalpine forest the Rwenzori is so famous for and this flora is often considered to be the botanical big game of Africa: the high humidity, intense radiation, almost total isolation of the mountains (the closest high summits are at least 200km south of it) allowed the afroalpine vegetation to reach huge sizes and to grow in a thriving manner: giant lobelia and groundsels can here reach the height of 4-5 meters.

In 1888, during his stay on the Western shore of Lake Albert, explorer Henry Stanley received as a gift an extraordinary sight: the clouds looming in the distance suddenly dissolved revealing a mountain range not seen yet by European explorers. Stanley had heard tales of the Mountains of the Moon, which had been mentioned by the Greek geographer Ptolemy as the source of the Nile. But, like many other locations in the interior of Africa during the XIX century, these fabulous mountains have not yet been located. In 1906 the Italian explorer Luigi Amedeo di Savoia, Duke of Abruzzi, led an expedition that successfully climbed the Rwenzori for the first time.